Who are the real patriots?

The primaries are over and Democrats across the country are gearing up for the General Election (November 6th!).  With the barrage of political ads we’ve all been subjected to, I’ve been wondering for a while now:

Who are the real patriots these days?  Who is carrying forward the vision of the country’s founders?

The GOP lays claim to the “patriot” title and it seems that they tend to define it as whoever carries the most guns, pays the least taxes, and has the most red, white, and blue t-shirts.  They quote slogans like “America First” and concepts such as “American exceptionalism” readily and question one’s patriotism if they don’t wear an American flag pin on their suit.

The GOP also claims ideological ties to the Founding Fathers, claiming they alone understand and uphold the original intent of the founders of the country.  Too often, I’ve seen Democrats roll over and just let them have it.  After all, the founders were all slave holders and what they did over 200 years ago doesn’t necessarily translate to today’s world.  Right?

As something of a history buff, I have to disagree with the right claiming this affiliation and with the left letting them have it.  There are several examples that illustrate this point, but I’m going to choose one that all of us should recognize from the Declaration of Independence:

We hold these truths to be self-evident, that all men are created equal; that they are endowed by their Creator with certain unalienable rights; that among these are life, liberty, and the pursuit of happiness.

The bold part was added by me, of course.  If everyone is endowed with unalienable rights to life, liberty, and the pursuit of happiness, which party is supporting those rights the most in the modern political landscape?

Life?  Do we even have to ask? Those of us on the left favor ideas like universal healthcare while the other side actively works to ensure that only those with the right financial resources have access to life saving medicine.

There is a public debate going on now about whether healthcare is a right or a privilege.  I’d say Thomas Jefferson seems to think it is a right. 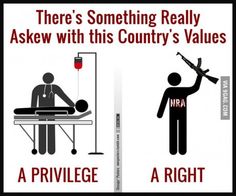 In addition, as we were all taught in elementary school, there are three basic human needs:  food, water, and shelter.   While the GOP has taken every possible step to limit access to food & shelter by decreasing funding for benefits programs or erecting stiff requirements, it is the Democratic party that is pushing to protect those lifelines for our fellow citizens in need.  Don’t even get me started on the EPA-led attack on clean water.

No, I never thought I’d type that sentence.

Liberty?  The United States has one of the highest percentage of incarcerated citizens in the world.  Many of these people are serving long sentences for non-violent crimes.  Some are serving time for crimes that aren’t even crimes any longer in some states.  Is that liberty?

Democrats are seeking to overhaul our criminal justice system by keeping dangerous people off the streets but re-thinking the failed “War on Drugs”.  What are the Republicans doing?  Doubling down on efforts to imprison non-violent drug offenders.

Pursuit of Happiness?  This is a broad topic that can mean many things, but the one issue coming to mind to me at the moment is immigration.

Note that the quote above does not say “all Americans”.  It was written at a time when the author was a British subject, but it doesn’t say “all Englishmen” either.  It says “all men” have these unalienable rights.  Everyone.

Study after study shows that immigration has a net positive impact on the economy, even illegal immigration.  The vast majority of immigrants in this country are here to work and live the American Dream.  We Democrats are working to help DACA recipients and provide a path to citizenship that works.  What are the Republicans doing?  Fanning the flames of xenophobia, cancelling DACA, refusing to replace it, and building a wall.

So who are the real patriots in today’s political landscape?  Who is carrying on the founding vision?  Is it the group waving the flag while they suppress the minority vote and take away people’s healthcare or is it the group fighting for the principles that the country was founded on?

It’s clear to me.